Canadian NDP Leader Jack Layton’s death in August has led to many new pieces of art, including this beautiful piece of graffiti in Toronto, one of dozens that have sprung up around the city.  Now, Canadian folk and children’s singer-songwriter Raffi has just created a musical ode to Layton, using the words of the  late politician’s last letter to Canadians.  My kids grew up with Raffi, and before today, I’ve never heard a Raffi song I didn’t like.  But I’m not sure about this one.  It sounds too much like a dirge, and not at all like Raffi.  See what you think.

Layton’s letter to Canadians was released the day he died of cancer. It had messages for young people, members of his party and Canadians at large. Some people made posters with the words from his letter, others wrote them in chalk at memorial sites across the country, including every surface at Toronto’s City Hall square.  Here are other examples of Layton art and graphics. 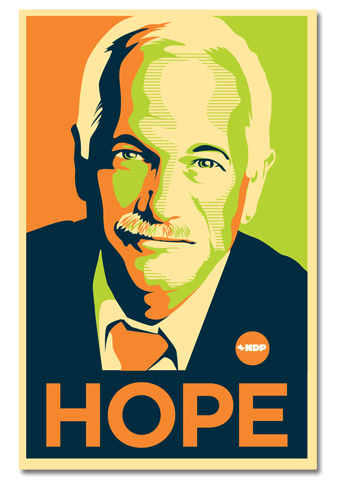