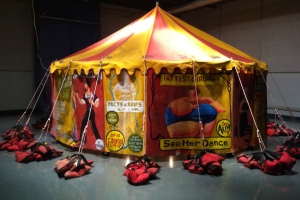 ‘Not a Freak Show,’ Growing Up Gay

Artist Spencer J. Harrison was Canada’s first academic to paint his PhD, earned in 2014 at OISE, University of Toronto. His “Not a Freak Show, Growing up Gay in Rural Ontario” opens at the Art Gallery of Peterborough April 29, 2017.

Saskatchewan artist Ward Schell is on exhibit at Slate Fine Art in Regina with new forest works in his signature tangled undergrowth style. The paintings have a dark edge, a symptom of his battle with worsening Multiple Sclerosis that has affected his ability to paint. In an interview […]

British actor Sally Hawkins is turning heads and creating Oscar buzz for her role as Nova Scotia folk artist Maud Lewis (1903-1970) in a movie that also stars Academy Award nominee Ethan Hawke.  (It opened April 14 in select cities). Maudie (trailer below) tells one of the most compelling stories […] 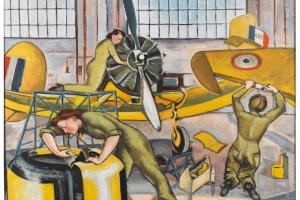 Paraskeva Clark (1898-1986) was a unique artist with leftist political leanings who focused on social and political turmoil, including the consequences of war and fascism.  Born in Russia, where she worked in a shoe factory

John Hammond (1843–1939): An adventuring artist, and an important chronicler of the opening of Canada’s railways, Hammond was a world traveller. This painting was commissioned by Canadian Pacific to show easterners (and investors) scenes of westward expansion. 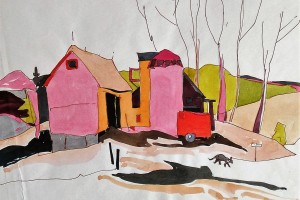 The Arts & Letters Club of Toronto has just opened Pat Fairhead @90, a retrospective on the life work of this Muskoka-based artist. During decades of travel, she has captured the primeval majesty of the Arctic, the rhapsodic colours of Muskoka’s landscape and the hypnotic nature of Haida Gwaii.