Artist Mitchell Fenton channels today’s handheld video devices for his journey through Canadian landscapes. The technique enables viewers to imagine what adventure would take place if we were able to hit play. (Above: Pause, oil on panel, 12″ x 15″) Historically, landscape painting was the main way the […]

The solo show that culminates John Player’s Master of Fine Arts work is a fascinating glimpse at the infrastructure of observation. His minimalist, faceless scenes of the surveillance culture that surrounds us go on exhibition this week in Toronto. 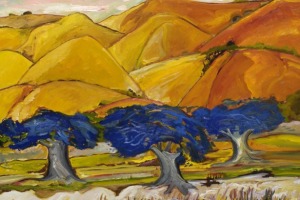 Yehouda Chaki presents works that are a believable reality yet entirely of his own making. Chaki’s sought-after oil paintings have been described as “a collision of the outside world with the artist’s innermost visceral perceptions.” The Montreal-based painter combines forceful lines with an emotion-driven sense of colour, as […]

Rachel Berman’s paintings have been likened to the poems of Leonard Cohen. The mysterious figures and hidden stories glimpsed in her paintings are a reflection of the mysteries Berman has unraveled in her own life.

Toronto artist Michael Adamson pulls from Baile Funk, the politicized dance music popular in disadvantaged areas, including the favelas of Rio De Janeiro. That’s where the music became mainstream in the 1980s.