The Fluency of Roksan Kohen

Roksan Kohen’s dynamic acrylics cover people, animals, fantasy environments and other settings, but she says she draws them all from an internal fluency that begins at some point, with every work. While working I do not think. I stare into the blank surface until I see lines and […] 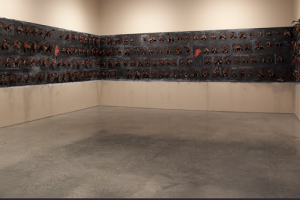 The Moth Girls of Wangechi Mutu

Kenyan-born artist Wangechi Mutu has been attracting attention since the 1990s for her depictions of black women, “tampered with and prey to strange bodily mutations.”   Moth Girls is an installation of hundreds of figures with leather wings and female legs, pinned on boards like insects. Wangechi Mutu, Detail, “Moth […] 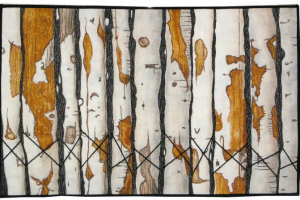 The words Robin Laws Field uses to describe her textured fibre art are as fascinating as her work: Colour and texture pull me in and keep me up at night until I’ve figured out how to make them mine; and then how to picture them so that others […]

David Kramer’s engrossing drawings capture his caustic attitude toward the disparity between the good life we imagine we’re going to get, and the way things usually end up. Perceived inadequacies at work or awkwardness at parties are magnified by juxtaposing his self-deprecating stories with the clichéd expectations of […]

Roof topping: Traveling Up to Shoot Down

This exquisite shot by Neil Ta reflects a block of the Bay Street financial district of Toronto, vertically, in the foreground building.   He’s a roof topper, a daredevil photographer who travels up to shoot down. The photo practice is widely catching on, and The Toronto Star just published […]

Cronología del ruido (Noise Chronology) is Pablo Genovés’ new show at the Galería Pilar Serra in Madrid, building on his previous series, (Precipitados) Time’s Alchemy. In his images of catastrophe, “destruction transgresses the laws of time and establishes its own chronology. The symbols and fictions of our culture apparently […]