This acrylic piece is just one example of award-winning artist Jordan Bennett’s style.  This 44-second video is the work he produced when the Art Gallery of Nova Scotia invited him to create a site-specific wall painting.

A Toronto gallery has cancelled an exhibit over criticism the artist is inappropriately “borrowing” from spiritually significant indigenous art. The Visions Gallery, where work by Amanda PL was scheduled, said the gallery was “immediately criticized” when the show was announced, and within 24 hours the event was cancelled. The controversy flows […]

Kent Monkman’s (b: 1965) powerful, large-scale travelling project for Canada’s Sesquicentennial takes the viewer on a journey through 300 years of history, narrating a story of Canada through the lens of First Nations.  Monkman is of Cree ancestry, is one of Canada’s best-known artists, and has an increasingly credible […]

Ursula Johnson, finalist for the 2017 Sobey Art Award, is an emerging performance and installation artist of Mi’kmaw First Nation ancestry.  Her Basket Weaving (Cultural Cocoon) series is an avant-garde version of use of the traditional materials 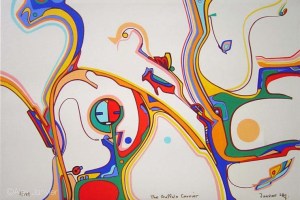 Contemporary artist Alex Janvier was influenced by painters Wassily Kandinsky (Russian) and Paul Klee (Swiss) but his ultimate style is a unique Canadian combination of Indigenous and modern art. A retrospective of his career is on exhibit at the National Gallery of Canada. 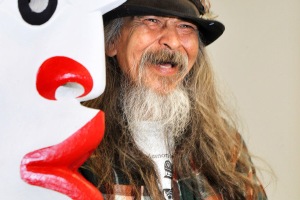 The Passing of Artist Beau Dick

I was sorry to hear of the passing of celebrated artist Beau Dick this week, a Kwakwaka’wakw master carver and a hereditary chief from the northern tip of Vancouver Island. He was known for his mask carvings and as an advocate for Aboriginal rights. You may have noticed […]