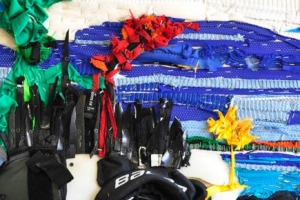 Toronto artist Liz Pead settled on broken hockey equipment and used jerseys when she went looking for “a truly Canadian material” for her works.  The landscape, hockey and the environment play large roles in how she expresses Canadian identity. (Above: Georgian Bay, 30 x 36″) 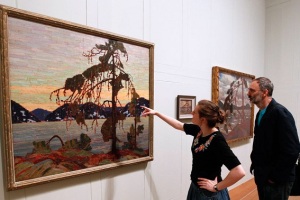 Tom Thomson & the Group of Seven in London

Two of Canada’s most iconic paintings are centerpieces in a major exhibit at London’s Dulwich Picture Gallery  aimed at introducing the revered Group of Seven to England.  The show is deemed so significant it has prompted British media, including The Daily Telegraph,  to send writers to Canada for […]

On the water, I prefer a kayak.  But canoes are such a part of Canadian life that I am endlessly drawn to the often mystical imagery of paddling, especially in art. So many iconic Canadian moments are tied to canoeing, including the wilderness trips of Group of Seven […]