These handbills are about to go to sale at Swann Galleries‘ annual Rare and Important Travel Poster auction (Nov 11) in New York.  The journey-to-Canada ads are among several hundred pieces of travel art deemed significant because they were previously not in circulation, or because of their dazzling themes or color.

Above is Rod Ruth’s Go Greyhound, Circa 1960.  He was a regular designer for Greyhound, creating posters for locations all along the bus company’s routes.  The Swann catalogue highlights this image by Tom Purvis,  called Canadian Pacific / Happy Cruises, 1937. It is expected to sell in the range of $4,000 to $6,000.

A poster for Indian Days, circa 1930, designer unknown, is described in the catalogue this way.

“The gathering of Native peoples in Banff was an annual festival from 1900-1978. The railroad had been promoting the event since at least the 1920s, and here, in a series of photographs, members of the Stoney tribe are depicted in all of their ethnic splendor.”  Swann Galleries 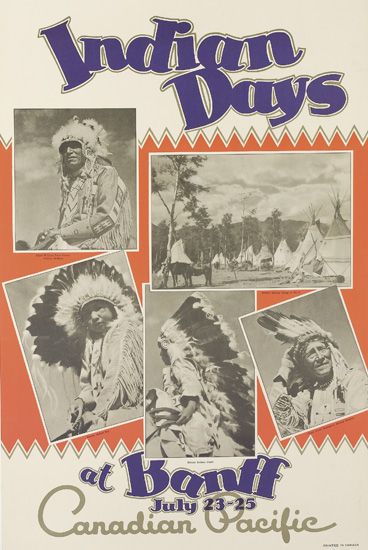