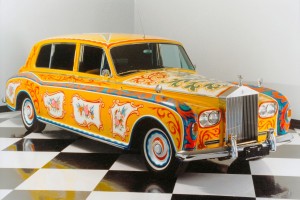 Time to appreciate this Rolls Royce Phantom V, delivered to John Lennon in 1965. The Royal British Columbia Museum in Victoria has held the car, and sent it frequently on tour, since 1992.  It took the Beatles to Buckingham Palace to receive their MBEs in 1965, although it […]

This ink drawing by John Lennon for what would become the 1967 album cover of Sgt. Pepper’s Lonely Hearts Club Band was found in a sketchbook left behind at Kenwood, the home where the famous Beatle once lived in Surrey. The sketch is up for sale at Julien’s Auctions for an […] 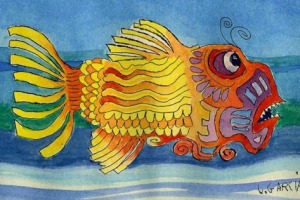 This limited edition “Fish” Lithograph is by  Jerry Garcia of The Grateful Dead, done with Stanley Mouse, 1960s rock poster artist and designer of The Dead’s album covers. It’s one of the offerings in a Hollywood & Music Memorabilia extravaganza next month at Philip Weiss Auctions. The sale […]