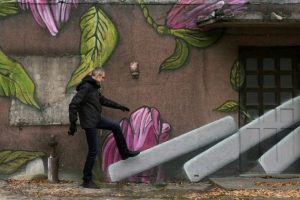 The border city of Windsor is the site of the National Mural Symposium 2012, a professional development gathering for mural artists, public art consultants and creative developers of community space. This year’s keynote is by Philadelphia-based Meg Saligman, creator of some of the world’s most iconic murals. Philadelphia’s […]

Montreal artist Shelley Miller creates intricate murals with sugar icing and edible paint applied like cake frosting, with a piping bag and tip. The street art starts out solid, but eventually disintegrates or washes away in the rain. The installation above – called Stained – in Victoria, B.C., […]