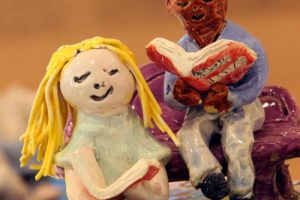 The works in this exhibition have been created by young artists who have experienced sexual and other forms of abuse and continue to speak out about their personal experiences through clay narratives.

Ceramist Janet Macpherson is acclaimed for her technically complex use of slip-cast porcelain in the creation of intricate animal forms. The Gardiner Museum commissioned her to do a special solo multimedia exhibition in celebration of Canada’s 150th anniversary this year.  It’s called A Canadian Bestiary.

Jason Holley’s raku chain sculptures are in the running for an RBC Emerging Artist People’s Choice award, a competition the public decides.  Holley, based in Newfoundland, says using clay for chainmail is tricky, requiring “a discipline and commitment I’ve not managed anywhere else in life.” (Watch him create in […]