What is there to say about this crazy creative concept by Armenian design studio Backbone Branding except bravo. It shows how far GIFs have come since they were largely confined to tumblr and were mostly about cats. Here are a few of the GIFs that have made these […]

You’re aware of GIFs, no doubt, those loops of motion now in widespread use. You may also know there’s an international conversation under way on whether GIF-based work is really art, despite its recent explosion. Well Montreal artist James Kerr (aka Scorpion Dagger) is already validated. He’s just […] 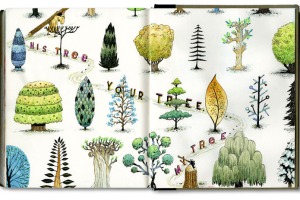 How to Sketch in Church: John Hendrix

John Hendrix is a renowned illustrator with a portfolio full of major projects, but his personal sketchbooks are worth a featured look. This sketch (you know – seraphim, the highest order of angels) was irresistible at this time of year.

Interest in a post on the GIF-laden Cephalopodoptera art  compelled me to post the mesmerizing work of Turkish multidisciplinary artist Erdal Inci.  He’s a master of the cloned motion version. (The silly, one-dimensional GIFs that are endlessly reblogged are so irritating, but I give credit to their originators for […]