Artist Arthur Lismer, who later would co-found the famed Group of Seven, was living 10 miles outside Halifax on Dec. 6, 1917 when he felt the shock wave of the largest man-made explosion the world had seen. The collision of two ships, one carrying munitions for World War I battlefields, rocked the harbour, killing 2,000, injuring 10,000 and flattening parts of Halifax and adjacent Dartmouth. Lismer took his sketchbook and began recording the carnage.

The explosion remains a searing moment in Canadian history, art and literature. It was the largest man-made explosion prior to the detonation of the first atomic bombs in 1945.

By 1918, a year after the devastation, Lismer and British artist Harold Gilman had both been commissioned as war artists by the Canadian War Memorials Fund to record war activity on the home front. The two men struck up a friendship and worked side-by-side on occasion.

An exhibition at the National Gallery of Canada (through March 17, 2019) brings together sketches and related material to explore the explosion, its aftermath and Halifax during the war. The exhibit focuses on iconic works of the harbour.  At the top of this post, Harold Gilman’s simply named: Halifax, 1918.  Below: Arthur Lismer’s Winter Camouflage. 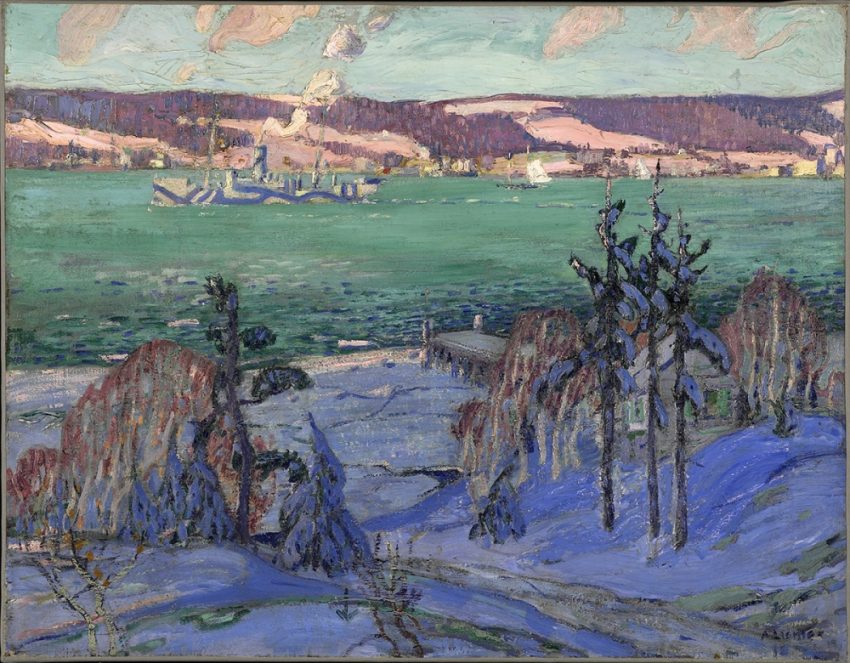 Background on the harbour paintings, here.

With this article, Canadian Art Junkie restarts the 150 Artists series, focused on artists of historical, artistic or cultural significance. Arthur Lismer of the Group of Seven is #35 of 150.