Toronto artist Cat Lamora’s three-dimensional paper installation deals with the experience of a gyopo —  the term for Korean expatriates who have been citizens in their new countries for longer than a decade.

Montreal based Yoakim Bélanger (b.1977) is a mixed media artist focused on the strength, passion and grace of the human body, most often using scraped or sanded metal plates. (Above: “Départ” mixed media on steel, 48″ x 68″)

Inspired by a flock of migrating birds, Jihee Min uses devices made to mimic wings in her exhibition A Few Flaps to Belong. The work draws a parallel between the longing for flight and the desire to cope with

Minas Halaj mixes elements of his classical education with contemporary influences to provide what he calls “a symphony of graphics, sculptures, collages and figurative compositions that indulge the senses.” 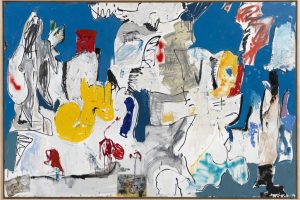