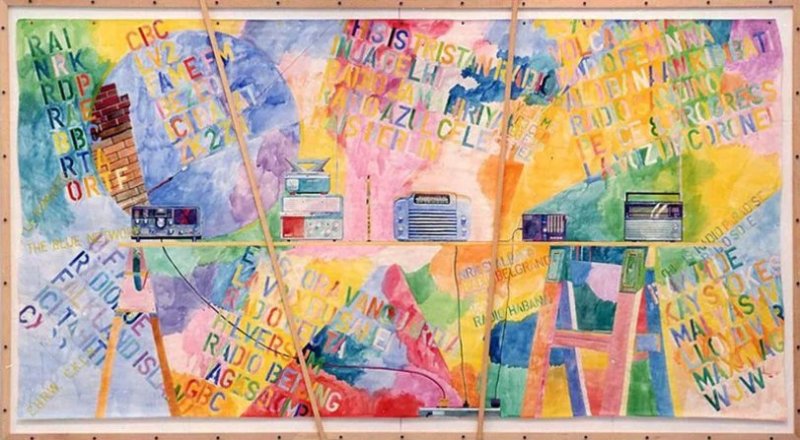 Greg Curnoe’s Short Wave Radios on Long Board (1987) is central to a new exhibition in London, Ontario. That’s where Curnoe led an important art movement from the late 1950s through the 1970s that became known as London Regionalism.

Greg Curnoe, Spring on the Ridgeway, 1964; oil on plywood and Masonite, rayon/nylon, metal, wood, paper, and string; 187 x 187 cm; Art Gallery of Ontario, Toronto. Sheila Thompson, who married Greg Curnoe in 1965, was the subject of many works throughout his career.

Curnoe (1936-1992) and colleagues were known not just for their art, but for their fight for the rights of artists to get recognition and monetary benefits, such as royalties, for their work. They helped found Canadian Artists’ Representation, a national organization of artists still operating today.

Canadian Art Junkie carried a previous, comprehensive piece on Curnoe, covering more about his witty work as an eccentric colorist – including visuals from a retrospective on his work.  Please see that item on Curnoe here.

A comprehensive biography on the Art Canada Institute, here.

Curnoe at the National Gallery of Canada, here.