At The Artist Project: Elaine Chan-Dow

Elaine Chan-Dow earned a degree in urban geography before she returned to her first love, photography. These images from Theatrum, a study of theatre spaces, will be on exhibit at The Artist Project in Toronto. 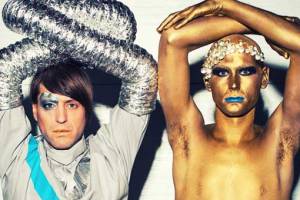 One of the big dogs in queer culture, Buddies in Bad Times is about to launch its 35th annual festival of the raw and radical (Feb 12 – 23).  The Toronto company looks to adventure loving audiences for its out-there approach to performances, including art. See more here […]

Toronto artist Gerard Gauci is widely known in Canada as a painter and set designer, especially for his still life paintings.  A 1982 graduate of  the Ontario College of Art and Design, he began his career as an illustrator and became a full-time painter in 1998. He has […]

Costume designer Alex Gilbert created this tutu out of treated paper bags, in the mode of  The Paper Bag Princess, the beloved children’s tale by Canadian storyteller Robert Munsch. It’s one of 60 made by artists, designers and the community for The Tutu Project, a celebration of the […]

The Art of The Puppet

Recognized as one of Canada’s foremost theatre artists, Ronnie Burkett has been credited with creating some of the world’s most elaborate and provocative puppetry. The artistry that has led to worldwide acclaim is front and centre in his current show, Penny Plain, opening soon in Ottawa on its […]