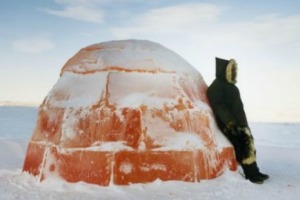 The Cool of a Lemonade Igloo

Dutch photo artist Scarlett Hooft Graafland spent four months in the Canadian arctic to produce her Igloolik series, including Lemonade Igloo (above), which really is made from blocks of frozen orange lemonade. –Polar Bear The images eloquently convey the frigid, barren nature of Canada’s far North, in a […]

Above the Tree Line: Large Format

The 32 large format photographic color prints on exhibit at the Robert McLaughlin Gallery are selected from a body of work by Arnold Zageris, who focuses on arctic and sub-arctic regions of Canada. They’re captured using a traditional large format 4×5 view camera. (Above: Minerals, Labrador; Below: Frost, […]

Sarah Anne Johnson has had a significant impact on Canadian photography, as winner of the Grange Prize, as a focal point of numerous exhibits and as a rising international star who represents this country abroad.   Her work is in New York’s Guggenheim Museum and she has taught photography […]