Glass Ceiling: Knocked off their Heels

There’s a fascinating story behind Jill Greenberg’s upcoming Glass Ceiling exhibition, an exploration of the depiction of the female body and the objectification of women.  The Montreal-born artist was commissioned in 2008 to do a fashion shoot using the US Olympic synchronized swim team as models, and found that two of the set-ups included high heels.  (Above: American Girl Doll, 41 x 56 ” 2010)

“Inspired by the shoot’s out-takes, I hired a local synchronized swim troupe in 2010 and directed the women with gestures as I sat at the bottom of a pool in full scuba gear with a state-of-the-art 65 megapixel back on my digital camera.”  Jill Greenberg 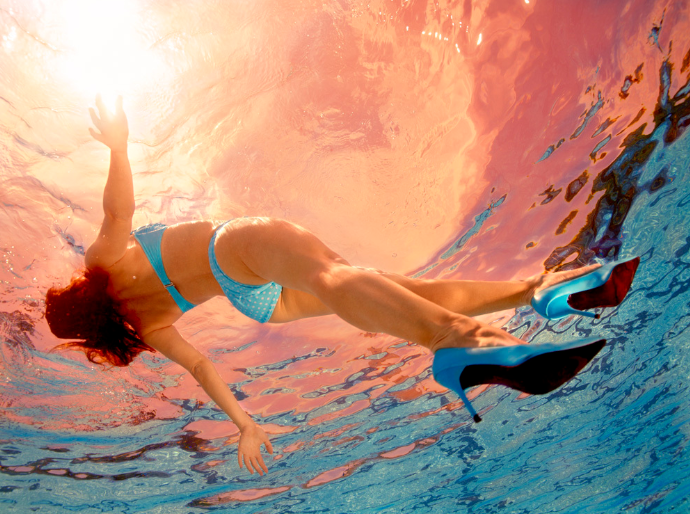 In Greenberg’s images, the female athletes try to pose, but the water knocks them into awkward positions.  The absurd heels further hinder their movements and underscore their lack of control in this world, Greenberg says.  The Glass Ceiling project is about the “set up” of being a woman.

The women’s identities have become inconsequential as their heads are visually cut off, leaving only the bodies in focus:  Clearly an analogy for the female experience, clashing beauty, power and violence. –O’Born Contemporary, where the exhibit opens April 28.

Greenberg is a working professional photographer who also does personal fine art.  Her newest work marks a return to the postmodern feminist theory that inspired her senior thesis, “The Female Object,” as an art student at Rhode Island School of Design in the 80’s.