“It is true that Robben Island was once a place of darkness, but out of that darkness has come a wonderful brightness, a light so powerful that it could not be hidden behind prison walls, held back by prison bars or hemmed by the surrounding areas.”  Nelson Mandela (1918-2013)

More than a decade after he walked out of prison – after the Nobel Peace prize, after his presidency, and long after he was globally revered – Nelson Mandela began to draw.

He revisited the wretched, sun-baked island that was once his prison and came away not with images of horror but of light. Mandela’s color-filled sketches – produced as lithographs in 2002 – symbolize his triumphs over the tyranny of the apartheid years. (Top: The guard tower / Above: The harbor, where new prisoners arrived)

The ultimate vision of hope, a lighthouse, kept ships away from the dangerous rock shelves that surround Robben Island. During Mandela’s 18-year imprisonment, it was a constant reminder of the impossibility of escape. 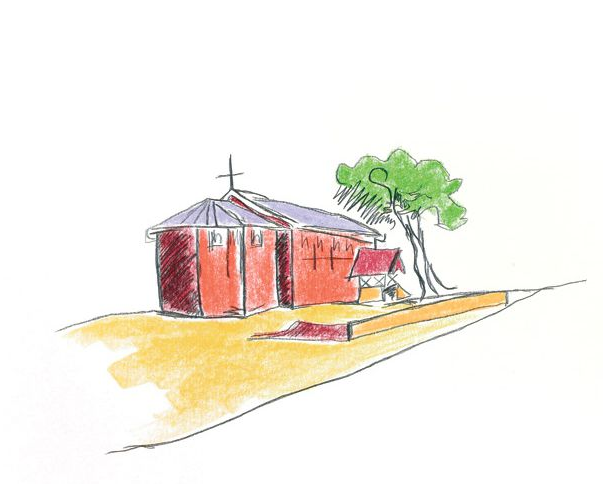 Prisoners were not allowed to enter the church, yet it remained a powerful spiritual symbol.  Mandala remained a spiritual force for millions, even in the months of severe illness that led to his death this week.