Nicholas Hornyansky (1896-1965) was born in Budapest and became familiar with technique long before he turned to art full time. Hornyansky was a colour mixer from the age of 12 in his father’s printing works. He later studied at the Academy of Fine Arts, and continued his studies in Vienna, Munich, Antwerp and Paris, making his debut as a confirmed artist (as a landscape painter, portrait painter and engraver) in Belgium in 1919.

During the 1920s, Hornyansky acquired technical knowledge of printmaking, specifically the complex process of aqua tinting. He exhibited extensively in Europe, before becoming a celebrated contributor to the field of Canadian printmaking. 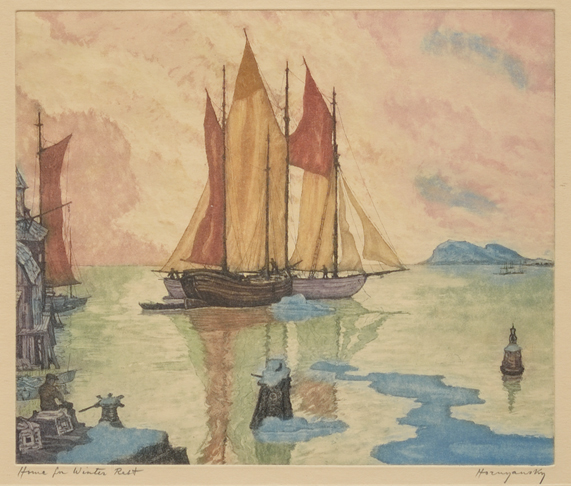 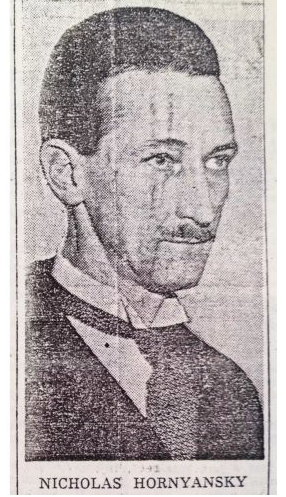 Hornyansky married Joyce Sands, a renowned cellist, and they had two children. The family emigrated to Toronto in 1929 and in spite of the Depression, the couple quickly found success in both their professions.

Hornyansky traveled all over Canada, creating pencil and ink drawings used as images in his etchings and aquatints. These images were then sold as prints and greeting cards. He is best known for his aquatints of buildings and landscapes in Ontario, Quebec and the Maritimes but also worked in watercolor, ink and gouache.

Hornyansky’s portraiture earned him commissions in London, England and attracted attention in Toronto.

He exhibited regularly with and became a member of the Ontario Society of Artists and an Associate Member of the Royal Canadian Academy. He also belonged to the Canadian Society of Graphic Art and the Society of Canadian Painters, Etchers and Engravers.

Hornyansky made major contributions to the advancement of printmaking in Canada and taught metal plate media at the Ontario College of Arts from 1945 to 1958. He exhibited widely in the United States and internationally and received numerous awards for his work.

Hornyansky’s works are held in collections including the Royal Ontario Museum, National Gallery of Canada,  the Musée Plantyn in Antwerp, the National Print Collection at the Library of Congress, the New Mexico Museum of Art in Santa Fe and the Pennsylvania Museum of Art.