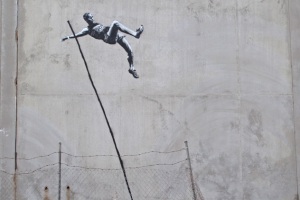 Underground artist Banksy has created three memorable images for the London Summer Olympics, released on his website this week and sure to cause controversy — not just because authorities have clamped down on graffiti but also because of the nature of the images, as in child labor, above. […]

Panik (Jack Murray) and other members of the famed British graffiti writers’ group ATG take their art to gallery walls in an exhibition called Silverlink at Klughaus  in New York. If you follow street art, you’re probably familiar with both ATG (Ahead’a The Game) and Silverlink, former name […]

I saw Laura Ortiz Vega’s fibre graffiti in Toronto a few months ago and her work is captivating.  She uses thread and a natural beeswax (cera de Campeche) on board to document the street art of Mexico City where she works. Some of her work was small street […]