Mary Pratt (1935-2018) earned a place as one of Canada’s most respected and popular still life artists with her hyper-realistic paintings of domestic activities: basting a turkey, preparing fish, cracking eggs. There’s even a memorial  stamp of one of her most famous works, Jelly Shelf – 1999.

Born Mary West in Fredericton, N.B., she painted from childhood, attended Mount Allison University and ended up marrying fellow art student  Christopher Pratt also a celebrated Canadian artist.   Domestic subjects continued to be a major part of her portfolio throughout her life. 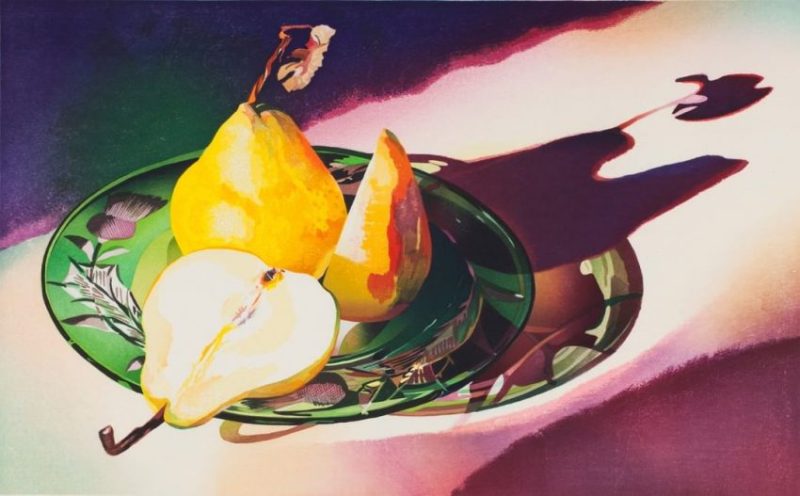 Pratt wrote of her “unexpected delight” in creating the now famous woodcut prints, Transformations (1993-2002).  “I found an artisan who understood my ideas so well that he needed little input from me once he had studied the paintings I provided. Gradually his own ideas melded with my original images, and I detected his own imagery inserting itself into my own. I liked that. It all fit.” (Mount Allison gallery, here – exhibit on through May 15, 2019) 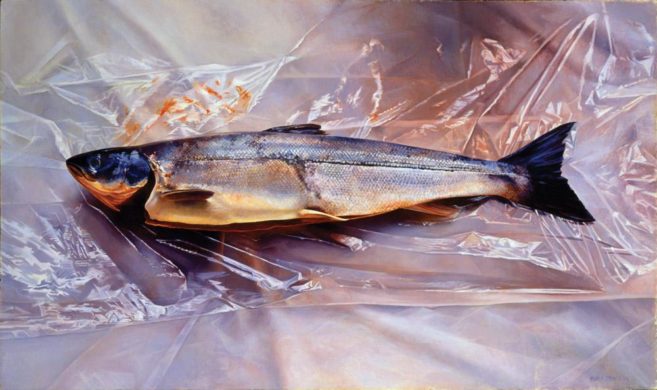 To achieve the photorealistic effect in her paintings, Pratt eliminated any trace of brushstrokes through a painstaking process that involves using small sable brushes and painting cross-hatched strokes with a mix of turpentine and Liquin. Her early paintings focus on household scenes, but some of her later work takes on a darker tone, with people as the subject. 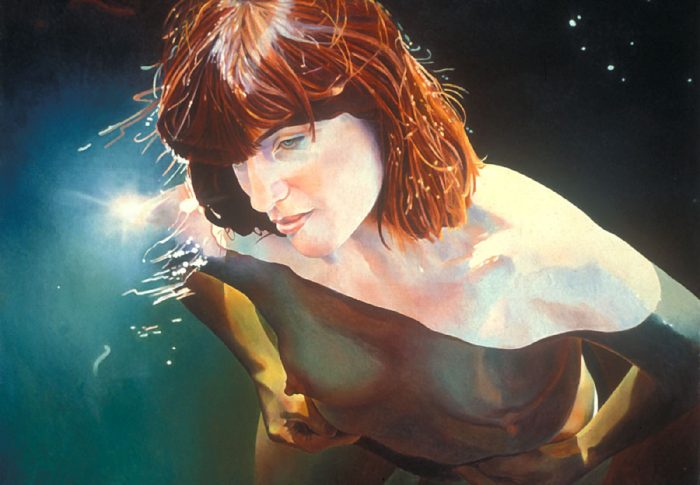 Pratt studied with renowned artist Alex Colville, who influenced the development of her style and her subsequent move to realism. Pratt said childhood memories of light and colour informed her visual vocabulary. 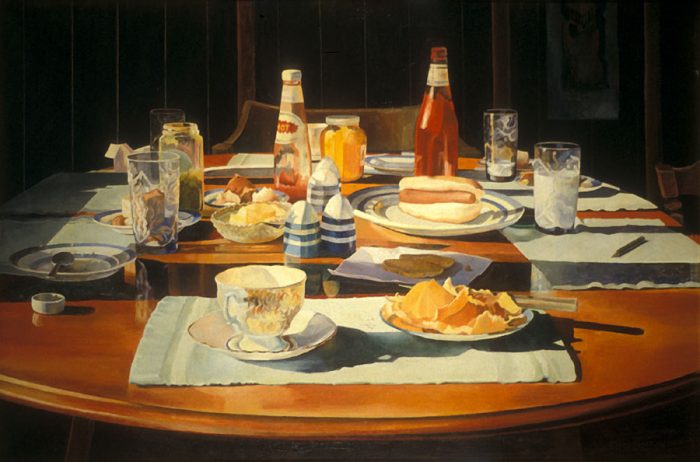 The palette Pratt used was wide and varied:

“Titanium White, Cadmium Pale Yellow or Lemon Yellow, Cadmium Red Light, Cadmium Orange, Permanent Rose, Alizarin Crimson, Ultramarine Blue, and Permanent Deep Green. I sometimes use Mauve, but only lately. I never use black except in watercolour; it takes the dance out of the painting, the dance that colour gives you. Instead, I mix up three dark colours.” –  Canadian Art 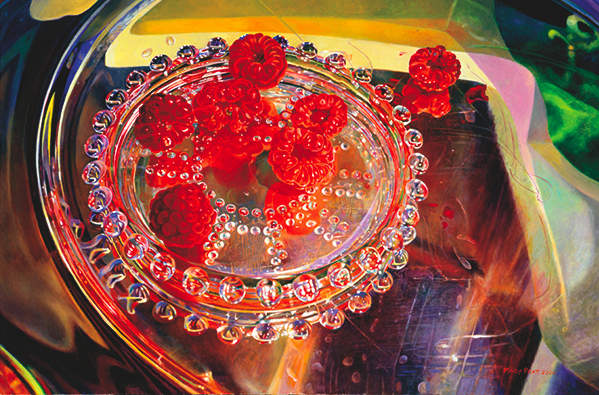 Pratt experienced what many working Canadian women of her generation faced in the 1960s, when she continued to paint while caring for four children. Frustrated by the lack of time for art, Pratt found that using a camera to “still” the light and the moment for her creations was an answer. Then she could later interpret the captured image in her paintings. 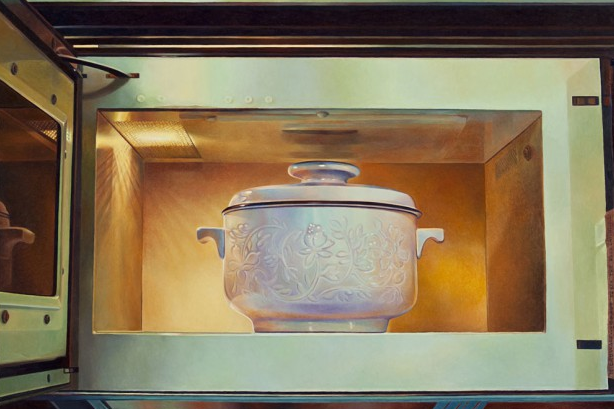 In early days, Pratt was considered a subversive feminist who brought domestic chores and subjects quietly into the foreground of art. By the time of her 2014 retrospective, feminism was regarded integral to her approach.

There’s a wry feminist humor beneath the surface of her paintings and often her quiet scenes of eggs, chicken and baked apples share an undercurrent of violence. The photorealistic detail of jagged surfaces, juices and bloody flesh makes clear how much effort (and sometimes brute force) is involved in creating the comforts of home. – article by TPL for the 2014 retrospective. 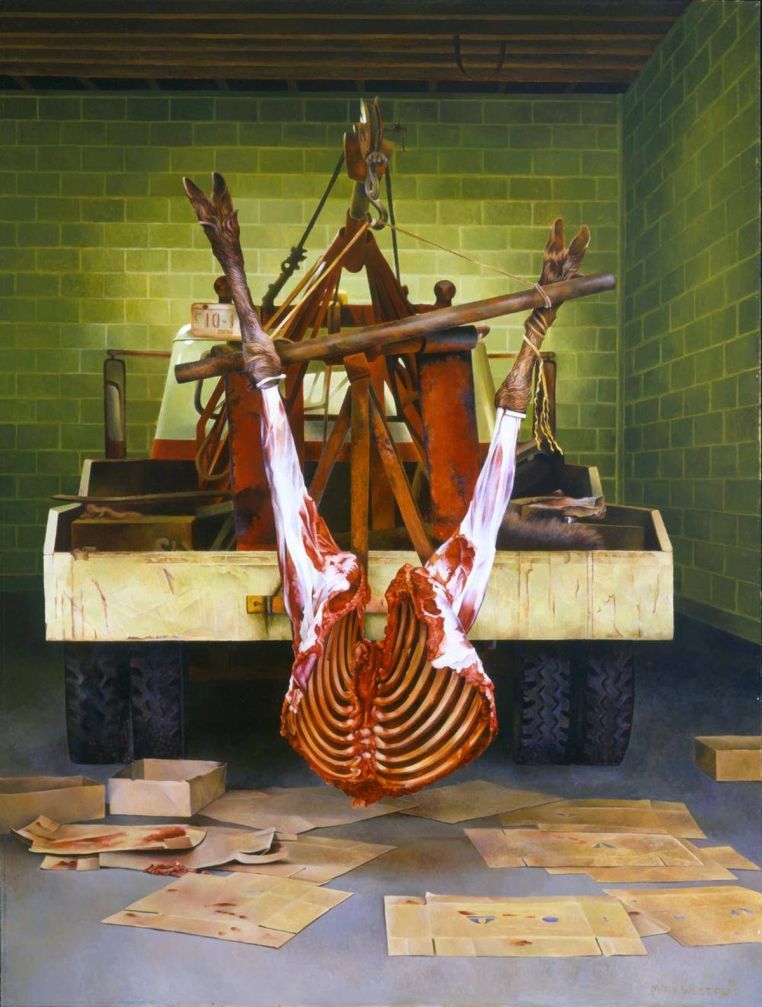 Pratt’s work often creates a sense of unease. Punctuating the show (the retrospective) are images of bonfires, fish heads, a splayed moose. 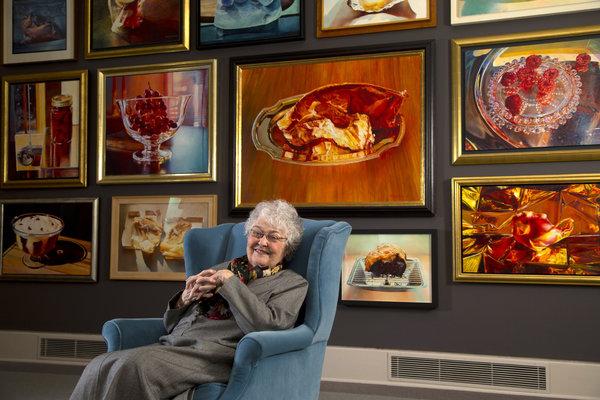 Pratt was awarded nine honorary doctorates, received numerous awards, had countless exhibitions and sat on many boards throughout her accomplished life, but above all she’s remembered for making the ordinary extraordinary.  (Image: Mary Pratt with some of her paintings in 2014 at the Art Gallery of Nova Scotia. Ryan Taplin/The Chronicle Herald)

Mary Pratt at the National Gallery of Canada, here.

A beautiful little essay on the Jelly Shelf painting, here.