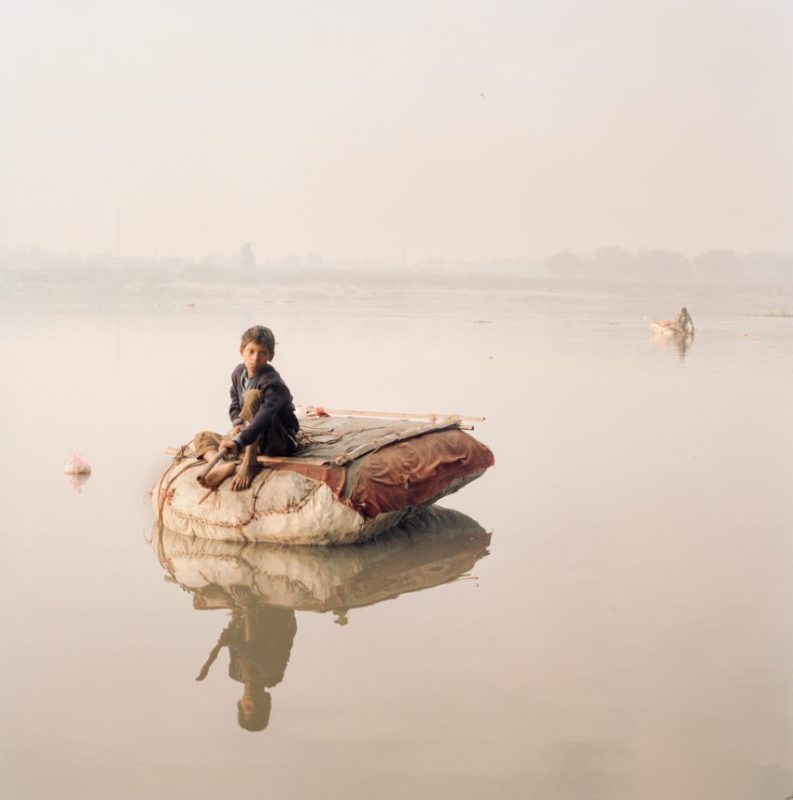 A homeless boy fishes for coins using a string and a magnet along the Yamuna river in Delhi, the main tributary of the Ganges.

Ganga Ma is the result of a 10-year photographic journey along the Ganges by Giulio Di Sturco, documenting the effects of pollution, industrialization and climate change. The project follows the river for over 2,500 miles, from its source in the Himalayas in India to its delta in the Bay of Bengal in Bangladesh.

Every year, during the dry season, the river on the Bangladesh border dries up due to the Farakka Dam being closed on the Indian border.

For Hindus, the Ganges, known as Ganga Ma (Mother Ganges) is the epicentre of spirituality. Many of India’s holy sites stand along the river, where purification ceremonies, bathing and other customs take place. It is also one of the world’s most polluted rivers, endangering the livelihoods of more than 400 million people and decimating countless species.

The Ganges River is a symbol of Indian civilization as old as Athens and Jerusalem, a source of poetry and legend, now on the brink of an ecological crisis.

Di Sturco’s book, Ganga Ma, is to be published in April. He began documenting the Ganges in 2007. He received a Getty Images Editorial Grant in 2014, and won first Place in the International PhotogrVphy Grant 2018 – Climate Category.

‘In contrast to the sensory onslaught typical of the myriad exoticizing images used to ‘sell’ India—bustling bazaars in kaleidoscopic hues, vertiginous throngs congregating on embankments—Di Sturco offers a perspective of quietude and restraint – from the publisher, GOST

A worker with a water hose tries to tame foam form chemical waste dumped by factories.

Giulio Di Sturco (b.1979, Italy) is an award-winning visual artist based in London. He studied at the European Institute of Design and Visual Arts in Rome before moving to India, where he spent 5 years refining his visual vocabulary working throughout much of Asia and Africa. He regularly contributes to publications including The New York Times, Vanity Fair, The Sunday Times Magazine, Geo, Wired, National Geographic and the Financial Times.