Toronto painter Suzanne Tevlin is an artist and educator it’s been a pleasure to feature in the past so I’m happy to share her latest work.  This is her series “Adventures of Pythia, the courageous Canadian girl who tries to save the world.” (More on Tevlin in previous posts: her Canada 150 series of wild and wonderful animals here and an intro to her work from 2012, here.)

That’s Eve down at the bottom wondering why she’s always criticized for her intellectual curiosity. Can she help it if she was simply smarter than Adam? The painting depicts another recent disaster for my heroic young Canadian girl to deal with. She’s busy, my Pythia – Tevlin on Notre Dame Burning,  oil on canvas, 6 feet high and 4 feet wide.

Pythia and The Iceberg (in progress), oil on canvas, 5 feet x 5 feet

This is Pythia arriving, via hot air balloon, on Innaarsuit Island, Greenland, as a giant iceberg, taller than Big Ben, threatens to overwhelm all things living there during the summer of 2018.

Miss Pythia in Paris As The Seine Breaches its Banks, oil on canvas, 5ft X 5ft

Tevlin has a sure-handed storytelling style, no matter the subject. This painting (oil on canvas, 5 feet by 5 feet) contains so much detail, including an excerpt on the bridge from the Pablo Neruda poem Every Day You Play. (the words are: “Suddenly the wind howls, Oh let me remember you as you were before you existed, Every day you play with the light of the universe.”)

Perhaps you’re wondering how Pythia came into being.

“Ophelia’s Lament started me off with a shadowy silhouette of a little girl singing to Ophelia, as she floated down the Gatineau River,” Tevlin says.”The Shadow emerged as Pythia in the Annointing painting shortly after (below).” 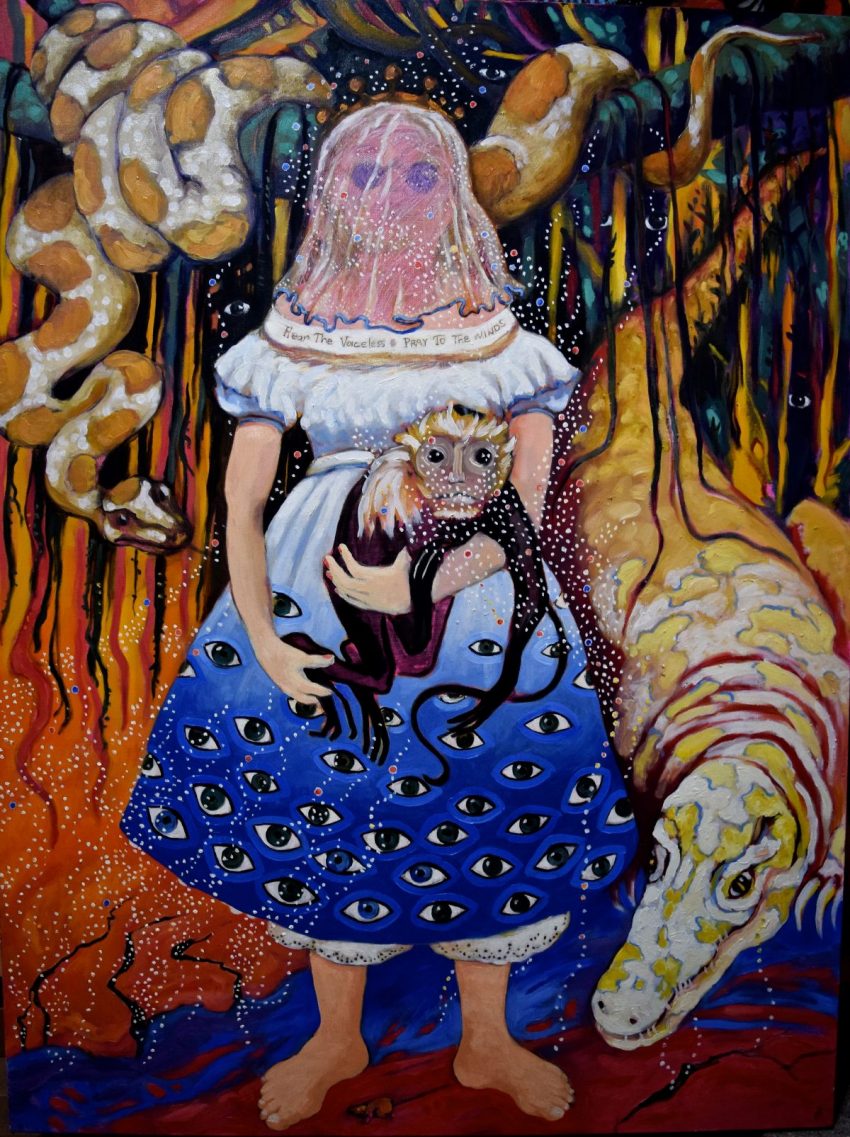 Below, a painting inspired by the Christmas Eve, 2017, birth of a baby white rhino, named Theodore, at the Toronto Zoo, and by the adventures of Clara the rhino, born in 1738 in India and painted by Pietro Longhi. Miss Pythia meets the mother rhino and baby Theodore at a Venetian Ball.

The series is filled with symbolism, much of it explained in more detail on Tevlin’s blog, which I encourage you to explore.

But as just one example, the title of the Notre Dame painting refers to the Great Red Dragon, from the Book of Revelation, and famously illustrated in the early 1800s by the British poet and artist William Blake.

Pythia was the mystic Oracle of Delphi, the high priestess of the Temple of Apollo, the most powerful woman in ancient Greece.

Suzanne Tevlin is a University of Toronto lecturer, art historian and writer, and has an international reputation that has prompted invitations from museums across Europe and North America.