Mario Doucette was an emerging Acadian artist when he was short-listed for Canada’s Sobey Art Award in 2008,  and his reputation has strengthened in the intervening years. Doucette’s latest recognition is to be included among 60 artists selected by the Massachusetts Museum of Contemporary Art for the largest exhibition of Canadian art ever held outside this country’s borders (May, 2012). 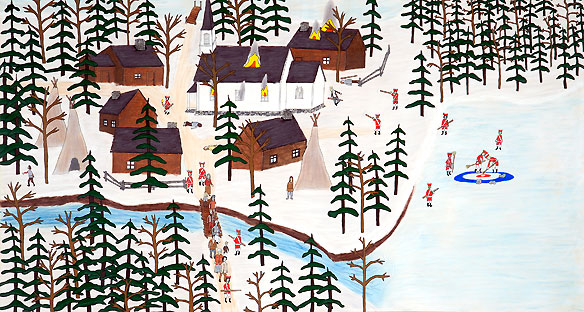 His paintings are primarily tableaux exploring the dynamics of the colonization of Canada, along with symbols of nationhood, and are often his own revisionist views.

More about his approach to British vs Acadian history on his website  and his blog.

Based in New Brunswick, he also works in video, digital animation, performance, and Super-8 filmmaking.  Doucette is a member of Collectif Taupe, a Moncton art collective which presents “fibs, pranks, and unsuspected performances” in a humorous, interventionist approach aimed at generating public dialogue.

Here is one of his Super-8 films called Raffetot, described by the artist this way: